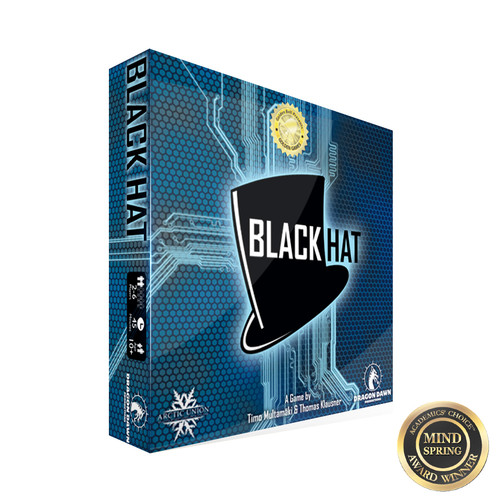 Hack the system and steal the data before anyone knows you’re there!

KEY FEATURES: Black Hat is a hacker themed board game for 2-6 players, including cool features such as:

In the game play trick-taking is the main mechanic, but you can win the game by winning just a few tricks, if you win just the ones that makes the most for your game.

FOR WIDE AUDIENCE: Black Hat has been tested with a very wide variety of players, ranging from 7 years old to 70+ years old. It works equally well with hardline gamers, families, social occasions and so on. We want to stress the point that despite age suggestion of 8+, this is not luck based childrens game, but a game which also children can learn and enjoy using the same rules as adults. Black Hat allows wide variety of game play strategies to be applied, none of them clearly superior over another, as you have to adapt to situation, unlike in usual trick taking games.

THEMATIC: Information wants to be free, but you charge by the hour...

In the world of network security, a Black Hat is a hacker who defeats computer systems for personal gain. These rogue data jockeys pit themselves against the most secure systems in the world for the thrill of it (and maybe to make a little money on the side). However, the most skilled hackers know it’s not about getting there first, it’s about ghosting in and out of the system without leaving a trace.

"Black Hat is something I haven't seen before - a trick-taking board game. Your strategy changes based on your board position. It's a very novel, fun concept." -- Kevin Wilson

The game itself is language independent, depending only on icons and color on the board and cards (no text). While the printed rulebook included in the box is in English, other languages (at least Finnish, German, Italian, Norwegian, Russian, Portuguege, Spanish & Dutch)  will be permanently available for download.