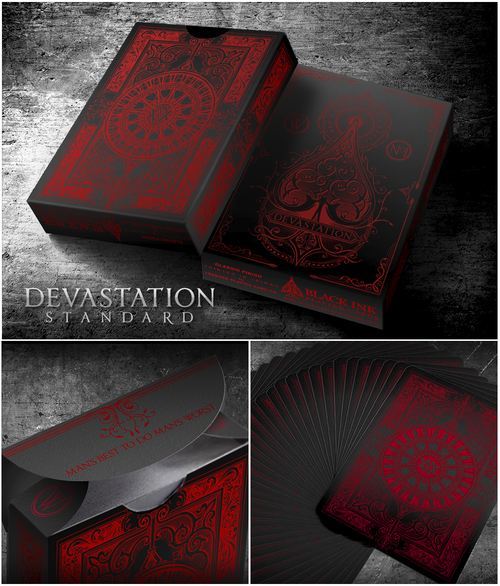 The Devastation™ Exclusive Playing Cards deck depicts the men who invented weapons of destruction and the women who rescued the victims. Man's best at man's worst.

The Standard Edition is the basic deck with an intricate and beautiful design.

On the Jack face card, Anton Fokker. He was an aviation pioneer and an aircraft manufacturer delivering over 700 military planes to the German air force. He is most famous for the fighter aircraft he produced in Germany during the First World War such as the Eindecker monoplanes, the Dr.1 triplane and the D.VII biplane.

On the Queen face card, Clara Barton. She founded of the Red Cross and worked as a hospital nurse during the American Civil War, and as a teacher and patent clerk.

On the King face card, Lancelot de Mole. His deeds led to the invention of the tank in the early 1900s after approaching the British military authorities.

Representing the Ace card in the limited edition, Athena is featured, an important goddess in the ancient Greek pantheon. Athena was the goddess of wisdom, courage, inspiration, civilization, law and justice, mathematics, strength, war strategy, the arts, crafts, and skill.