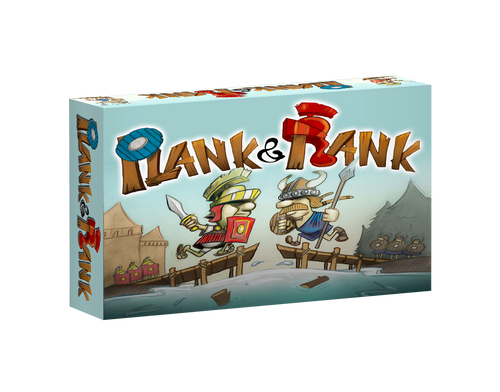 PLANK & RANK is a two-player game in which you must build a bridge, plank-by-plank, across the Rhine River while simultaneously moving your army, rank-by-rank, to the opposite side. 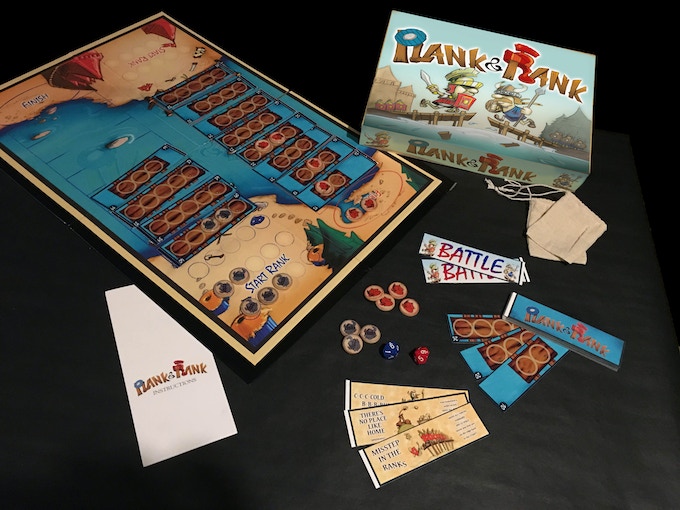 But be careful, there may be a few snags and surprises along the way. So choose your side, Roman Red or Barbarian Blue, and get ready to do battle. Do you have the Gaul? 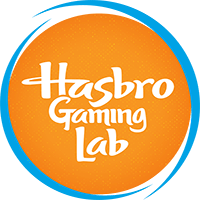 Be the first to build a bridge across the Rhine River and move all of your soldiers to the opposite side. 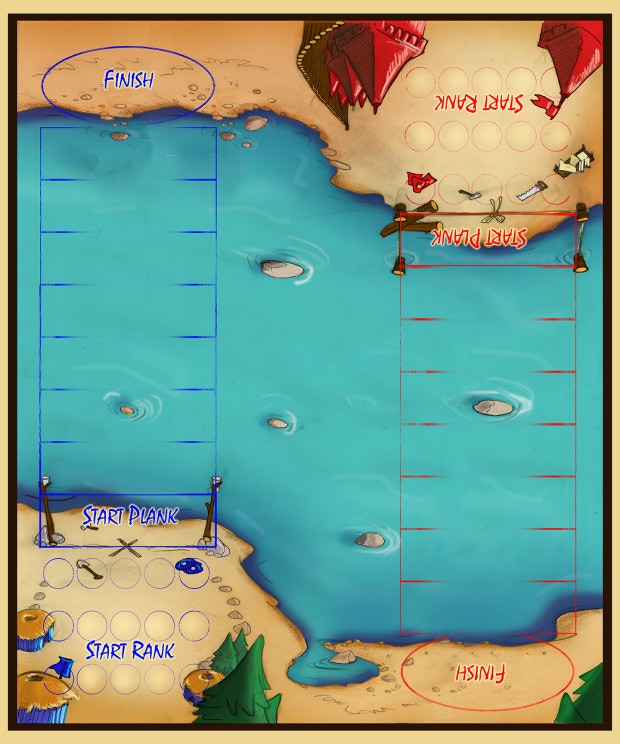 Pick a side - Roman Red or Barbarian Blue.  Each player has ten (10) color-coded tokens and a corresponding 10-sided die. Place your ten tokens in the first ten spots on your designated side of the river.

Each player is also dealt a hand from the PLANK CARDS!

Shuffle the deck of PLANK CARDS and deal FIVE (5) cards, face-down, to each player. Place the remaining deck to the side as a DRAW PILE and flip one card face-up for a DISCARD PILE.

Now it's time to play!

Each turn consists of two parts - PLANKING and RANKING. 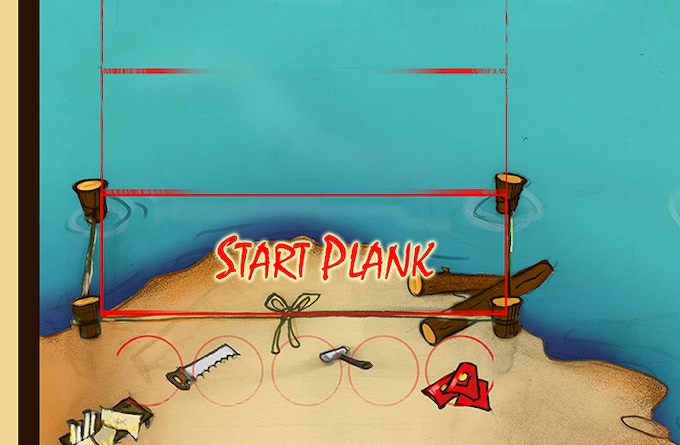 PLANKING is the process by which one builds their bridge (using the PLANK CARDS). 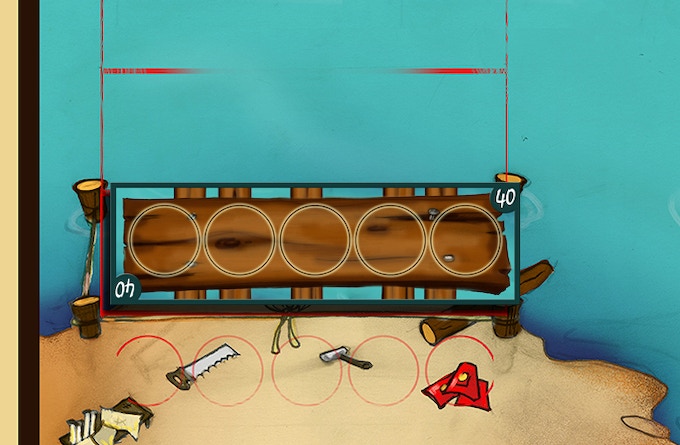 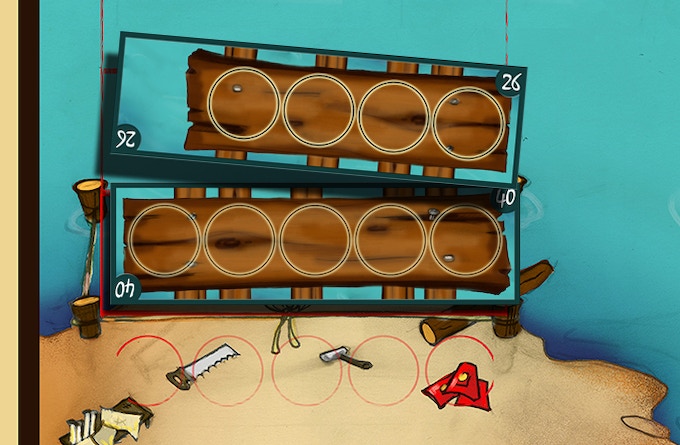 Pick up a PLANK CARD from the DRAW PILE (or from the DISCARD PILE if one so chooses) and add it to your HAND. You may then choose to PLACE a plank, SWAP a plank, or TOSS a plank.

To PLACE a plank, you simply place one card, face-up, in the first available slot on your side of the river. NOTE: Each subsequent plank you later place must have a smaller numerical value than the previous, so that the bridge descends in size as it spans the river. Planks DO NOT, however, have to be in direct sequential order.

If you are unable to PLACE your plank, you may then either SWAP it or TOSS it.

To SWAP a plank, you simply switch a card from your hand with one previously placed on the river (keeping note of the “descending order” rule). You then place the newly swapped plank into the DISCARD PILE. NOTE: You MAY NOT swap out a plank if any of your SOLDIERS (tokens) are currently standing on it. So plan accordingly.

If you are unable or unwilling to PLACE or SWAP a plank, you can simply…

TOSS a plank into the DISCARD PILE, keeping in mind that your opponent will be free to choose this card at the start of their turn. 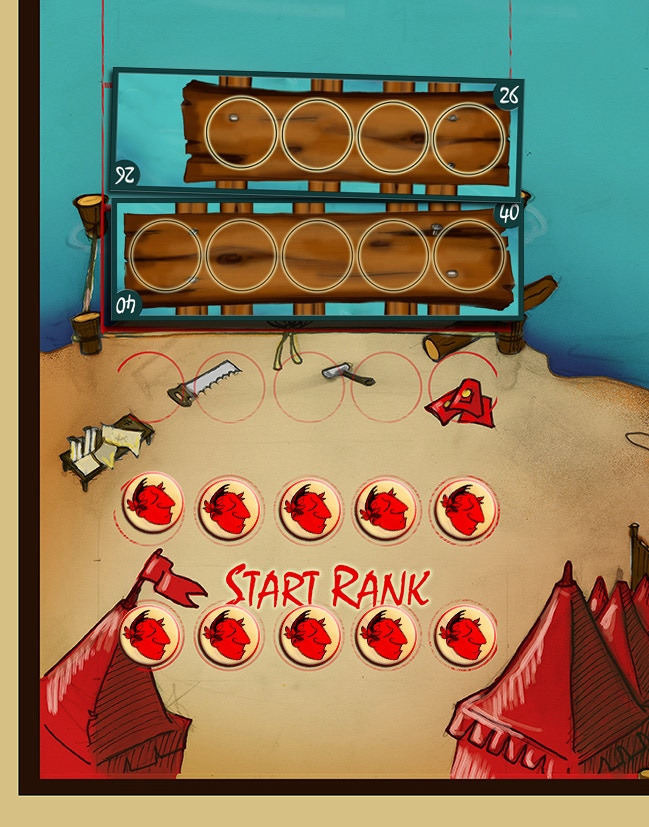 RANKING is the process by which one moves their soldiers (tokens) across the bridge using the roll of the dice. You can either SCOUT (by moving one token multiple spaces) or MARCH (by moving multiple tokens a single space each). 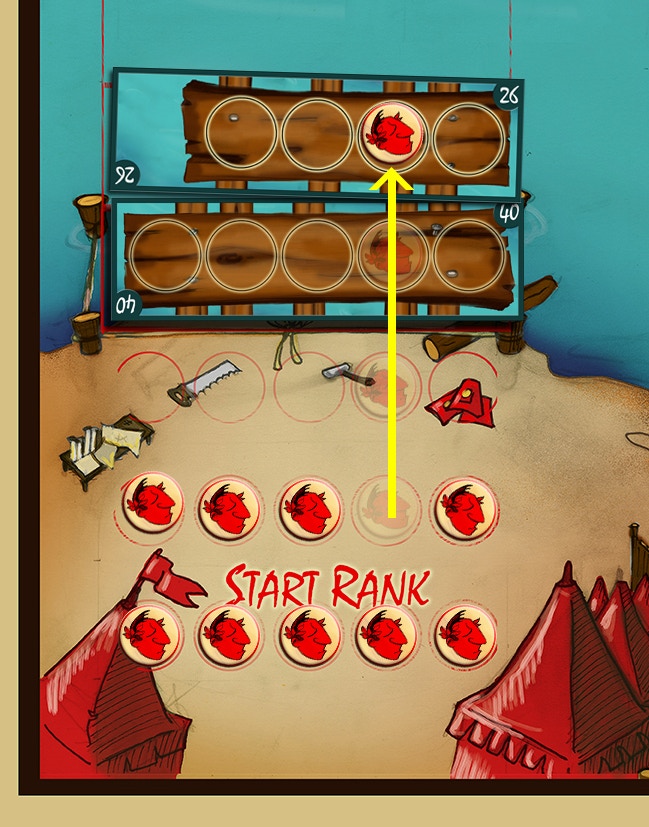 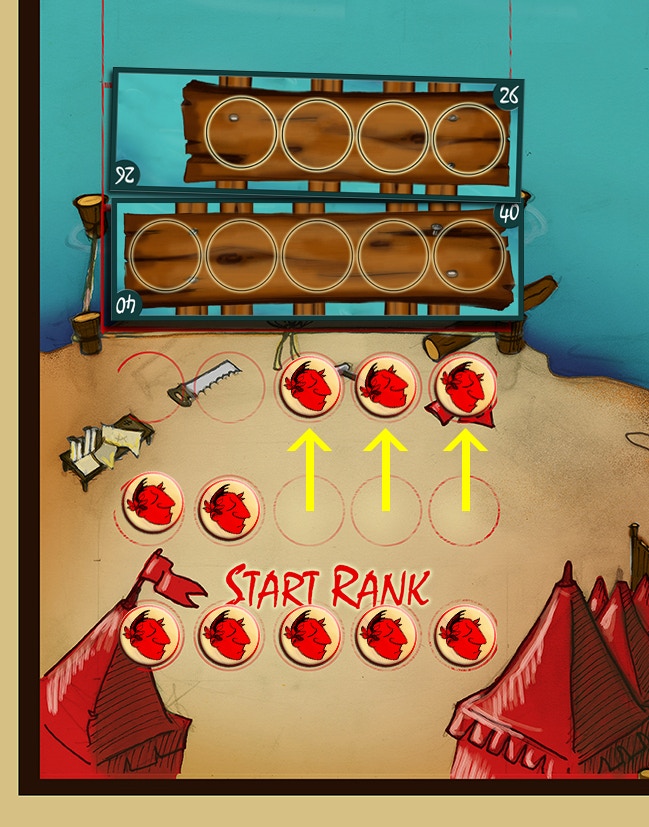 To RANK, you simply roll your DICE. You may then choose to either SCOUT or MARCH.

To SCOUT, move ONE (1) token the given (X) number of spaces.

To MARCH, move MULTIPLE (X) tokens one (1) space, and one space only.

Moves cannot be divided between a SCOUT and a MARCH, and all moves must be completed in the EXACT number of spaces rolled (meaning that there are no extra or leftover moves once a piece or pieces have reached their intended spot(s).)

Tokens are free to move forward, backward, left or right in any form or fashion. They CANNOT move diagonally, JUMP other tokens, or DOUBLE-BACK over the same space within the same turn.

PLANKS will get smaller as they descend, so a token may have to compensate for this shift in size, moving sideways when needed.

These cards are mixed in with the normal PLANK CARDS. Players are free to save them in their HAND and play them at will. To play one, simply place it on the DISCARD PILE at the start of your turn and follow the given instructions. 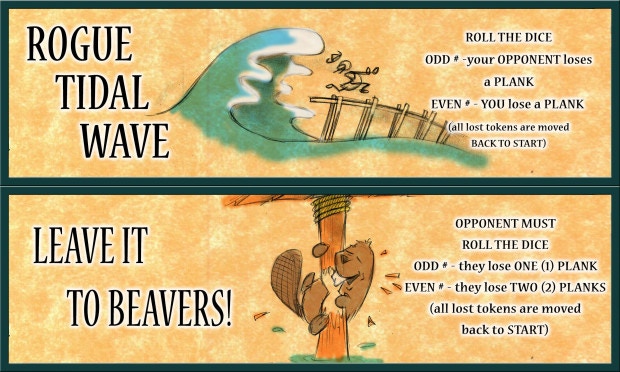 EVENT CARDS depict different actions which may help or hinder your progress. Either you, your opponent, or both of you, will have to follow said instructions. 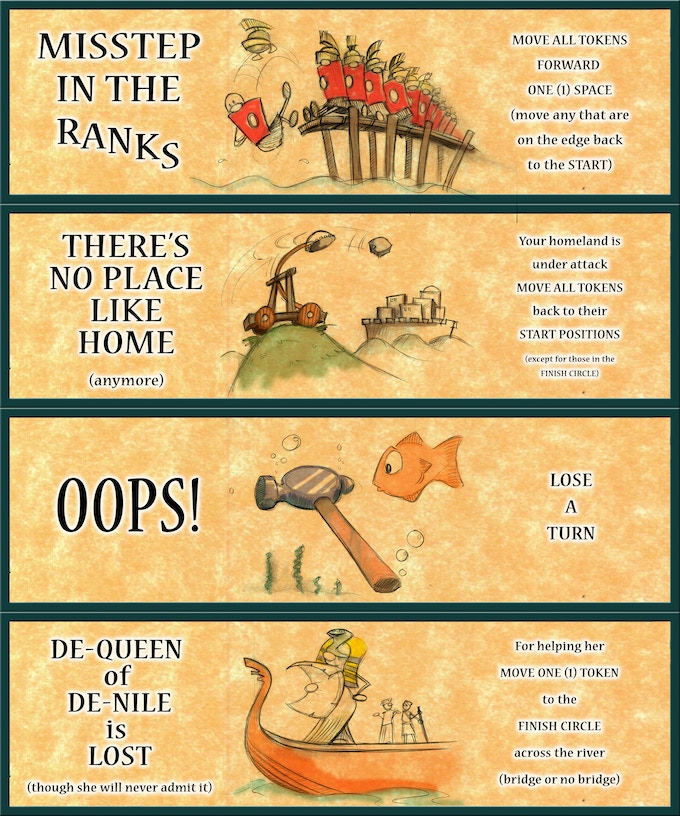 BATTLE CARDS send the two players into head-to-head combat.  Using their dice, they must battle for control over each others PLANKS.

BATTLE CARDS require both players to ROLL THEIR DICE. The highest number wins. The winner can then choose to remove ANY PLANK from their opponent’s bridge. (Any tokens on that plank are moved back to the START). The winning player may then SWAP the stolen plank with any of their own (following the above rules for swapping) if they so choose.

The discarded plank card is then placed BENEATH the discarded BATTLE CARD, removing it from availability on the next turn.

If rolling the dice results in a tie, the battle simply ends and regular gameplay continues.

Once the entire stack of PLANK CARDS has been played through, simply shuffle and flip the DISCARD PILE and start again.

How to Conquer and Claim Victory!

The first player to build their bridge (and keep it intact) while simultaneously moving all of their tokens safely to the opposite side WINS THE GAME!

The Plank and Rank: Hannibal Expansion! 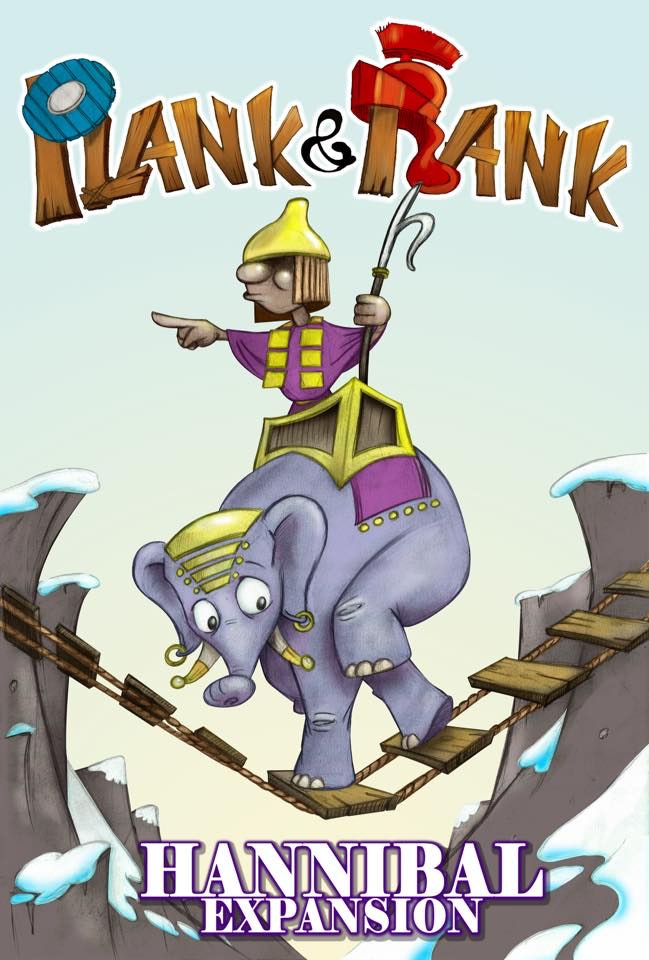 Plank across this overpass but be careful and make sure not to fall down! 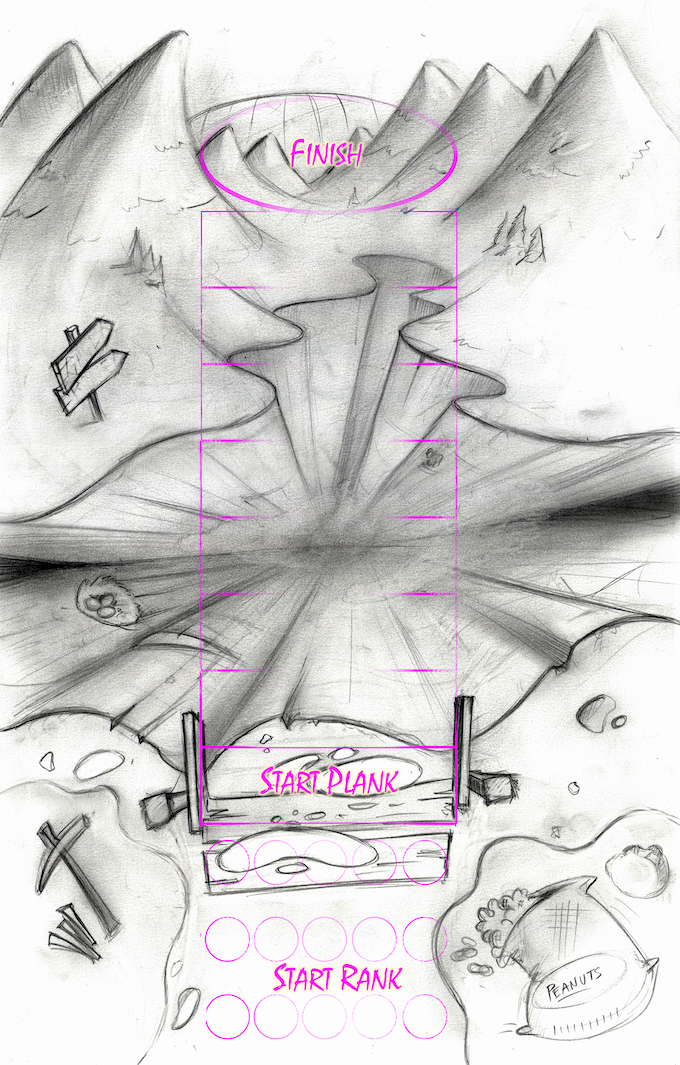 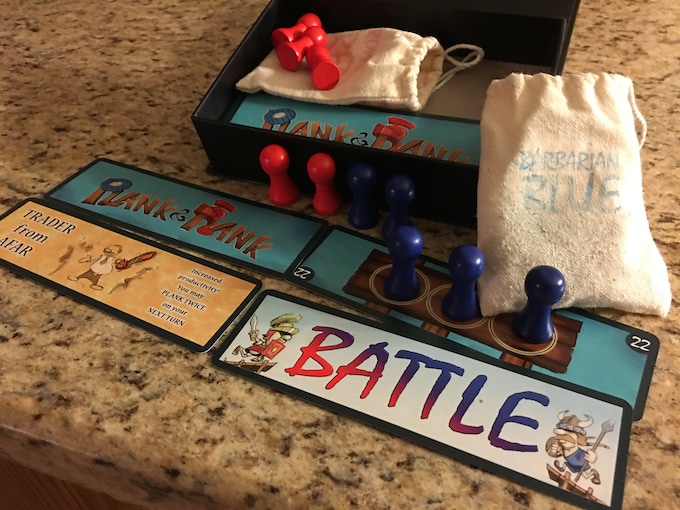 The Adventures of Jam and Jelly