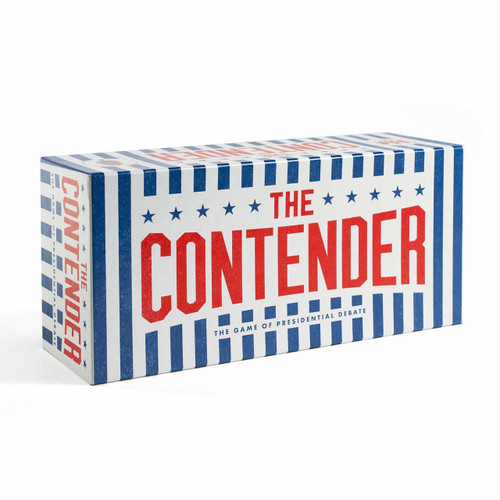 The lights are on, the mic is hot, and you are a presidential candidate on the debate stage.

Like a real politician, you don't need to know anything about the debate topic. Instead, combine your pre-written talking points to grandstand, attack your opponents, and rally the public into a patriotic fervor!

The Contender is a performance game with no knowledge of politics, debate, or improvisation necessary. It allow introverts to compete evenly against extroverts, and it can be enjoyed by groups of people with opposing political beliefs.

You'll combine multiple cards and read the bold red text aloud to convince the moderator to vote for you.

This is an example play for the debate topic: Democracy.

Your opponents can then respond to the topic, respond to what you said, or say anything else they want because that's politics.

The Contender is used in schools across the country to teach the power of rhetoric in debate.

Doesn’t pick a side or let players pick sides. Enjoyed by Red Team and Blue Team, even at the same time.