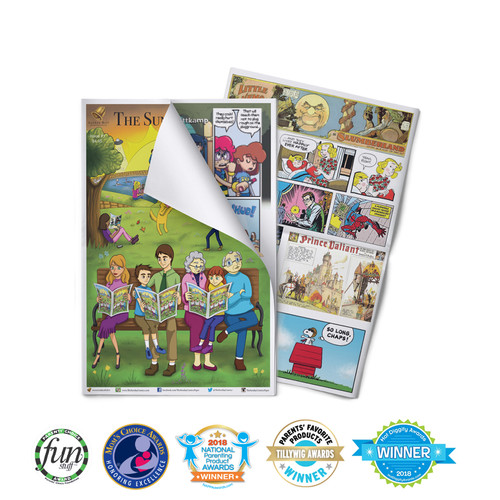 Part ode to the comics of yesteryear and fascination with really big comics, Golden Bell Presents: The Sunday Comics! The Sunday Comics is not your typical newspaper, rather, a new, innovative way to read and enjoy comics. Every issue's packed with dozens of original stories, while featuring a sprinkle of everyone's favorites! What's in every issue? Each issue of our comic brings readers varying kinds of styles and comic art, ranging from comic strips, serialized genre stories, political, editorial, gag cartoons, and illustrated stories. With a wide umbrella of genres, including, but not limited to, science fiction, fantasy, adventure, drama, crime, horror, and comedy; every issue includes something that will catch the eyes of any reader and comic enthusiast. Of course, classic strips like Peanuts, Dennis the Menace, and even Tarzan will have their place thanks in part to the Billy Ireland Cartoon Library and the major syndicates. These syndicates house everyone's favorite comics and characters such as Amazing Spider-Man, Archie, The Phantom, Pearls Before Swine, Nancy, and Marmaduke. Licenses Our team has been able to acquire the rights to create the official "Yooka-Laylee" comic strip, based on the upcoming video game. Additionally, Jim Davis, creator of Garfield, has given The Sunday Comics permission to make brand new and original Garfield comic strips in each issue, soon to be showcased in its own special issue. The Size-Each issue of Golden Bell Presents is printed on 15 by 22 inch high quality paper and is in full color. We believe that there's a certain timeless quality to physical paper that's lost when one must read digital comics on laptops or tablets, pinching fingers on a screen just to read the word bubbles. We know everyone will love this classic re-invigoration of yesteryear mixed with a modern storytelling sensibility. It's a high quality publication that even the whole family can enjoy together. Order your copy today and make comics big again!