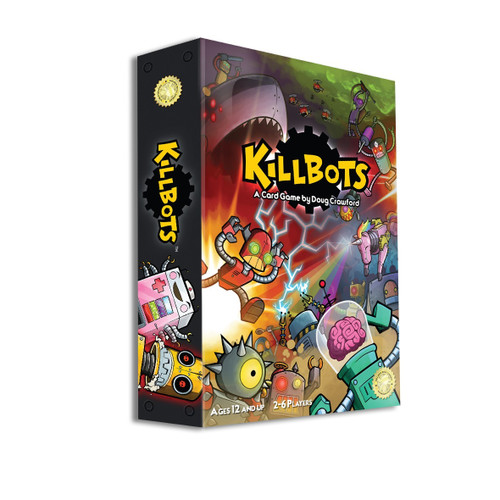 What are robots for if not competitive combat? Take the role of a master builder and square off against fellow scientists and engineers in a battle of robo-supremacy in KILLBOTS! 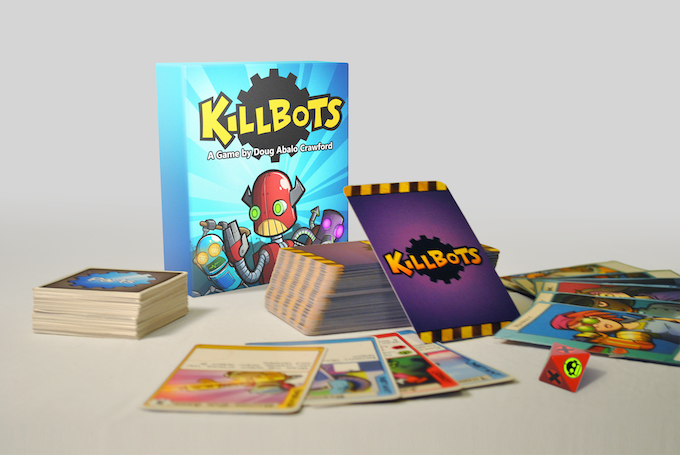 There's a small catch though...

Each robot has a positive and negative action. Every time a robot attacks it could deal damage, heal a fellow robot, or even steal another player's cards. But maybe something will go wrong and your robot will attack you, or switch sides, or simply explode. Robots are unpredictable - they're more of an art than a science, really. This element of chance keeps the action dynamic and unpredictable, as well as leveling the playing field a bit for new players. Players able to better manage their robots in play and anticipate these events will ultimately come out on top! 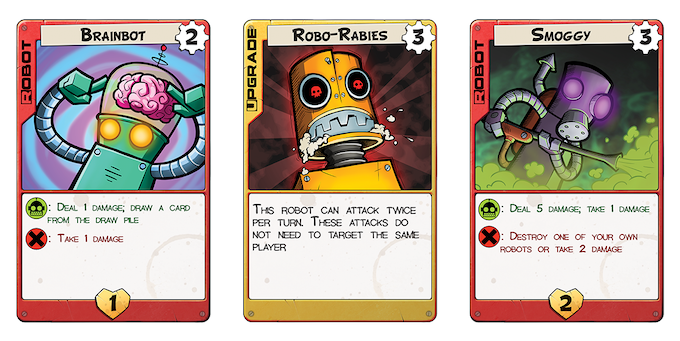 Killbots is a competitive tabletop card game for 2 to 6 players where each player builds and controls an army of imperfect killer robots. The functions of each robot are determined by a custom 8-sided die - effectively making all moves calculated (or uncalculated) risks and keeping gameplay fresh. With over 150 cards included in the base game alone, prepare to amass a robot army ready to be assembled by you and your enemies! 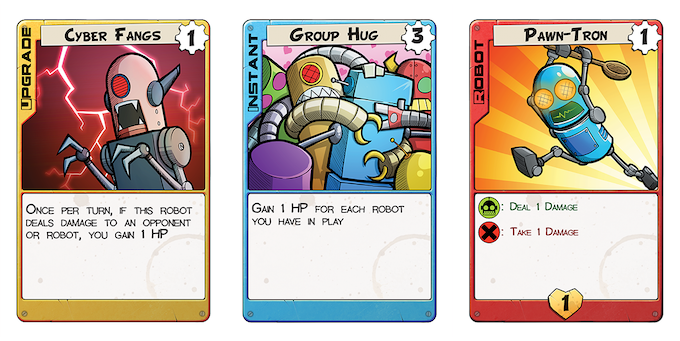 As you've already seen examples of, Killbots features a boatload of painstakingly hand-drawn artwork (over 60 unique illustrations) in each standard deck, hand rendered in dazzling 2D! Each card's artwork is the result of hours of loving labor - it's like a tiny art gallery you can play with! 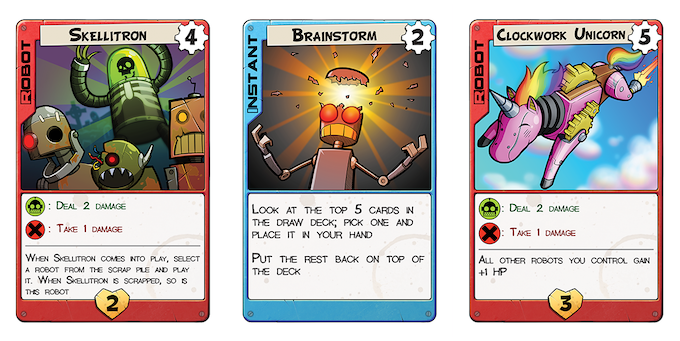 Let's take a closer look at everything you'll find when you open up the box: 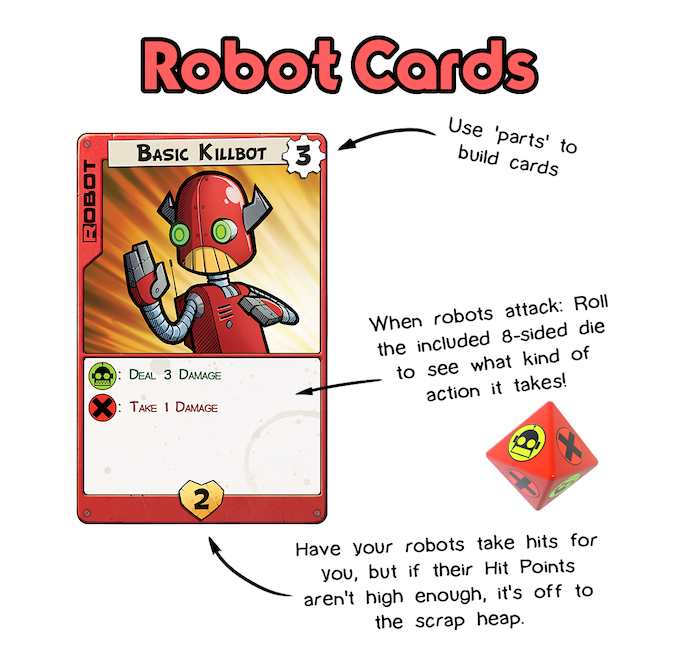 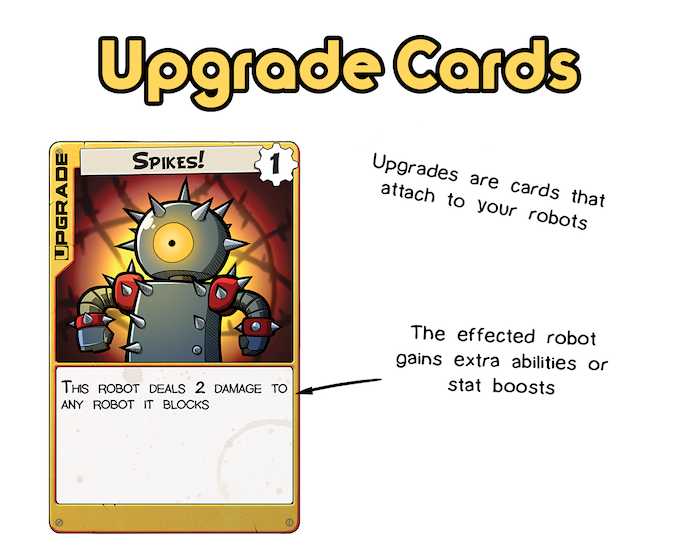 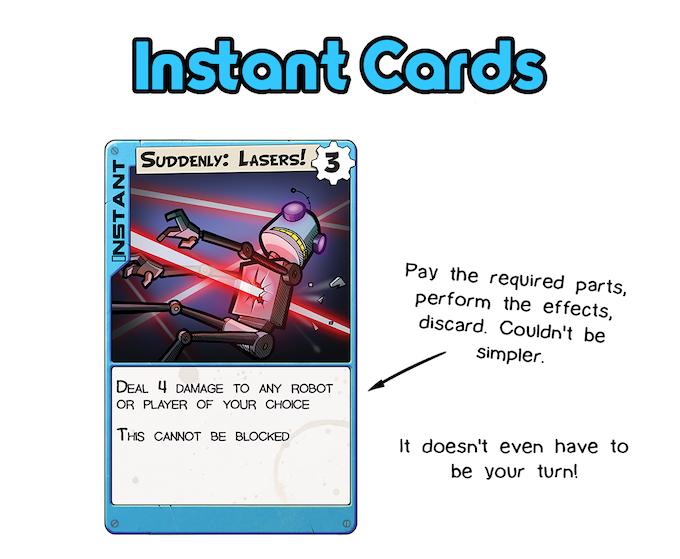 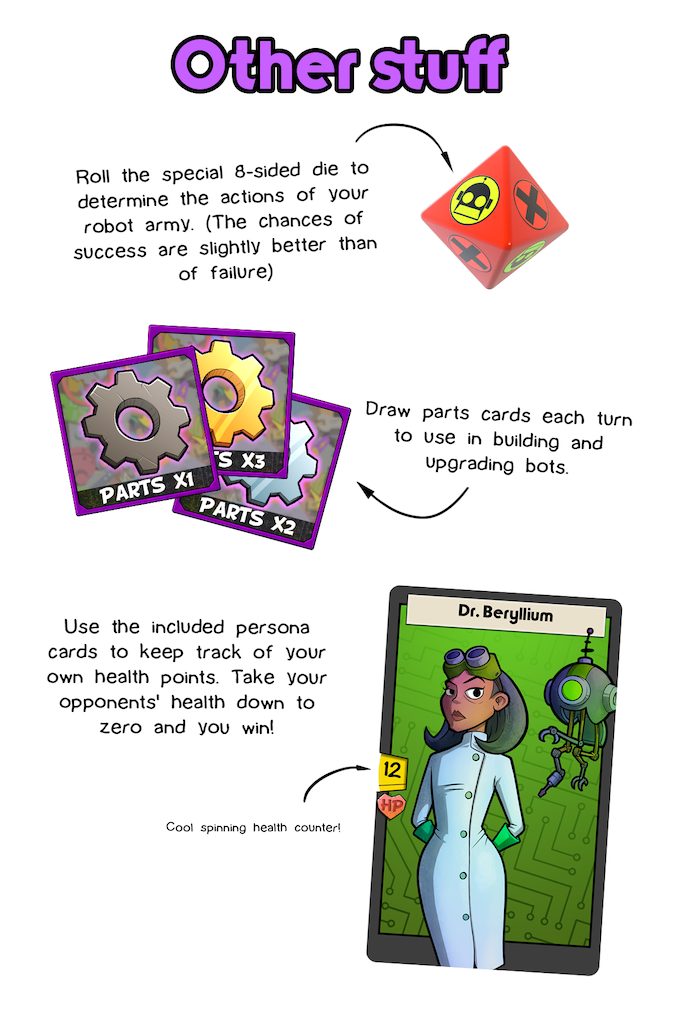 Killbots is easy to learn, but offers lots of depth and room to formulate your perfect strategy. It has elements that might be familiar to anyone who's played competitive trading card games, but simplified down to their core ideas. No small novel to read before getting started - just a quick and easy set of instructions and you can get going building your friendly death machines.

Basically what players will do, step-by-step:

1. Each player begins with 20 health points, represented by a persona card of the player’s choice.
2. At the beginning of each turn players will make sure they have up to five cards in their hand from the main deck; if not, players draw up to five.
3. Players will also get to draw two parts cards from the parts pile at the start of their turn.
4. After drawing their cards, the player begins the build phase, playing as many cards as they want as long as they have the parts to afford putting the cards in play.
5. Following the build phase, players enter the battle phase; players choose which robots will attack the opposing player of their choice.
6. The attacking player looks at their attacking robot(s) noting the function, highlighted in green, and the malfunction, noted by the red “X” marker. Players then roll the 8-sided die to see the outcome of their robot’s attack. Attacks can be successful, unsuccessful, or malfunction completely.
7. The opposing player chooses to either have a robot defend the attack (if successful) or take the damage themselves.
8. Play continues until only one player is left alive!