Play simultaneously as Dinosaurs in the past, and Paleontologists in the present. 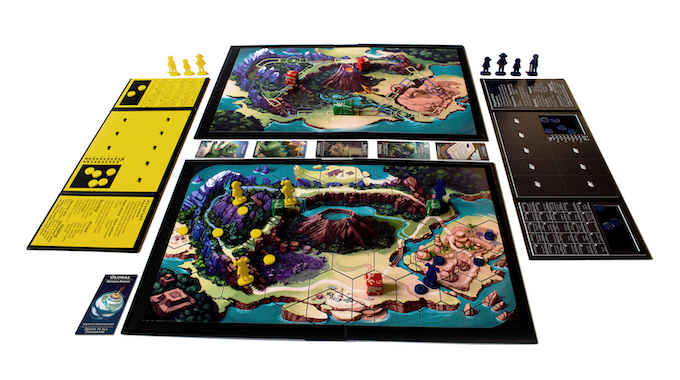 One island, played in two eras, where 2 to 4 players control the fate of both our lovable yet extinct friends, the dinosaurs...

...as well as the fearless paleontologists tasked with collecting and assembling the dino remains. Welcome to In a World of Dinosaurs.

Each turn, players will move on both boards. On the Dinosaur Board, they will be controlling the destiny of the dinosaurs. As these giant (yet fragile) creatures stumble around the island, they will succumb to tar pits, landslides, meteors, hunger, temptation, and all sorts of other devilish prehistoric traps. As they die, their remains appear on the island of the future as fossils, ready to be excavated.

On the Paleo Board, playing as paleontologists, players will race to explore the jungle, expand their territory, and dig up as many fossils as they can get their brushes and pickaxes on. As you assemble these fossils, you send them off to a museum on the mainland where children will hopefully be spilling over the velvet ropes to view the dusty old bones. The better your fossils, the more visitors will come streaming through your door. Have enough visitors to your museum and you will be crowned the victor! You brave paleontologist, you.

Here are the basics of a players turn.

The Dinosaurs are a very large part of the game. Not only do you control them on the prehistoric board, but they are also the scoring system. Players can hold out to fully assemble their favorite giant lizard.

However, the real magic begins when you start to mismatch dinosaur parts, and create beasts like this: 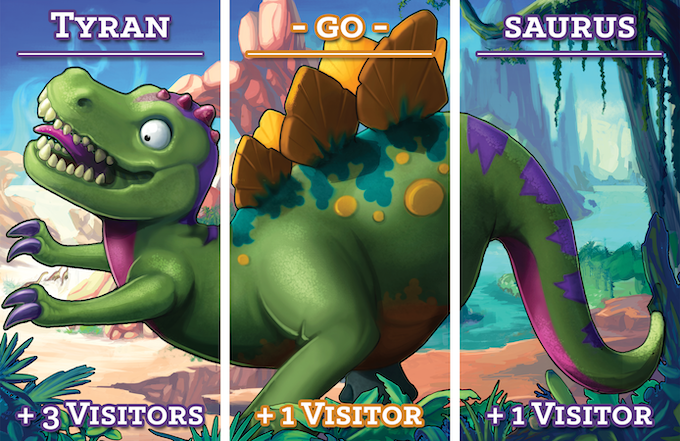 The value of each dinosaur is a combination of the values of the fossils, and the number of pieces that match. This Tyran-go-saurus here has 5 points, and 2 matching cards, for a total of 10 points. Not bad for an abomination of nature!

Right now we have 3 dinos completed by our artist, but there will be 8 in the final game: