Mr. Game! is a board game that begins like any other. Players roll the dice and move around the board. The first player to make it to the goal wins. Although straightforward at first glance, the crazy fun happens when cards come into play.

Along the way, players draw cards from a deck filled with bad ideas. These cards change the game in dangerous and unpredictable ways. Move the goal, move other players, or even change the landscape of the board! Bend the game to your advantage or just mess with other players! The choice is yours.

We decided to keep the core rules simple. This simplicity means that how the game is played is open to interpretation and exploration, allowing every play-through of the game to be unique. We encourage pushing boundaries, creativity, and asking questions. During the game, one of the players will act as "Mr. Game". When a question about the rules or cards arises during gameplay, "Mr. Game" answers them and controls the flow of the game. This player is essentially a judge and has the final say on decisions. All players have their own personalities and ways of thinking, and Mr. Game! allows players to explore their different viewpoints. 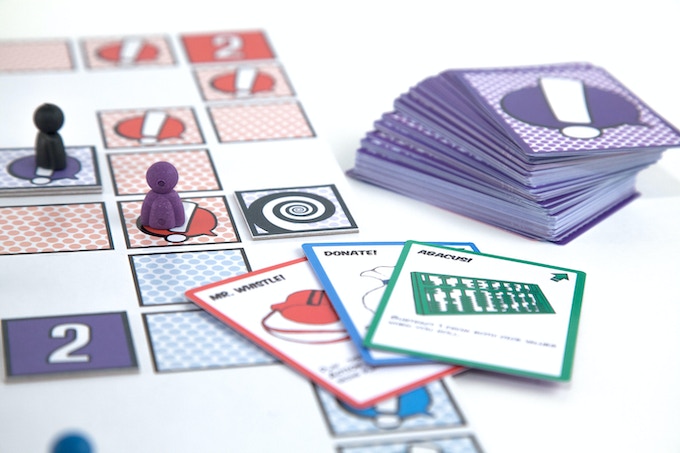 There are a few things about the Mr. Game! board that may stand out to you right away. First of all, there are numbers on each corner of the board. Second, there doesn't appear to be a logical place to start. And finally, there doesn't seem to be an end goal. Since a large component of the game is a goal that can change, move, or disappear, we threw out these basic notions of a beginning and an end as being part of the physical board. 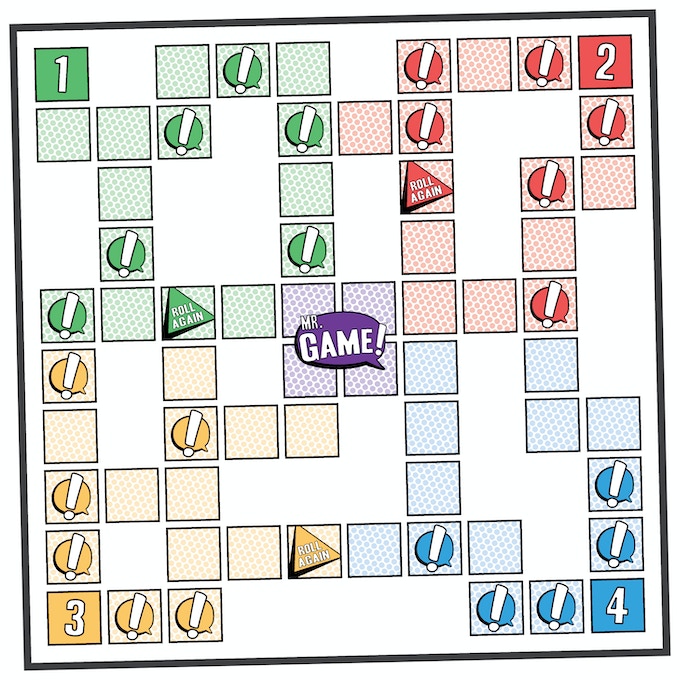 When the game begins, players put their pieces on the 1 space. A Goal Marker is placed on the number 4 space to indicate that 4 is the goal. During the course of the game, the goal can change to any of the other numbers of the board - you may get very close to 4 and then suddenly realize that now you need to land on a 2 to win!

Other than that, the board is quite simple. Numbers are numbers, normal spaces have no effect, and if you land on a space with a ! on it, you draw a card.

There is only one deck in Mr. Game!, but there are three kinds of cards.

Actions are the most basic kind of card in the game. When you draw one of these, you must do what it says right away. These add a layer of chaos to the game - you never know when someone is going to draw a Switch card and take your coveted spot on the board! Goal Switch changes the goal and leaves it up to the luck of the dice.

Badges are secrets. When you draw one of these, you are not obligated to show it to anyone else. Hold on to these as they can be used whenever you want, even when it isn't your turn. Pay attention, because you wouldn't want to miss your chance to race to the front of the turn order with Mr. Zipline, or prevent someone from playing an important card with Mr. Whistle!

Powerups are abilities that change how your character moves around the board. When you draw one of these, you must reveal it to all other players and keep it somewhere everyone can see it. It should be mentioned that not all Powerups are good. Half of them are more like "Powerdowns". Some, like the dreaded Ball And Chain, don't even allow you to move. If you ever roll doubles on your turn, you lose all of your Powerups.

Tiles are movable spaces you can place on the board. Different spaces have different effects, and tiles add new types of spaces that aren't on the board.

Tiles with Webs trap players who are foolish enough to walk on top of them. Portal tiles transport players to other Portal tiles - or maybe even to another dimension. Null (white) tiles cover up parts of the board, making them completely impassable!

These cards provide examples for when tiles come into play. Landslide gives a player the chance to move every tile on the board. Mr. Shovel lets you remove a single tile in a very particular scenario. Breadcrumbs leaves a tile behind you when you move, changing the board in unpredictable (and often disastrous) ways. 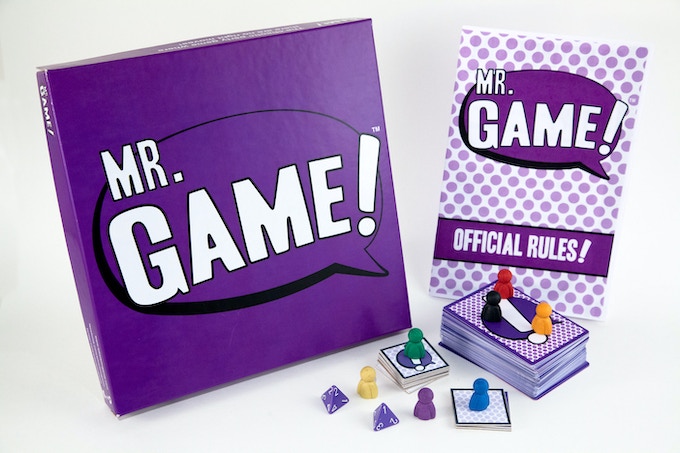 Every copy of Mr. Game! comes with everything you need to play the game - no DLC required. Here's a list of the components you'll find in the standard version of the game: 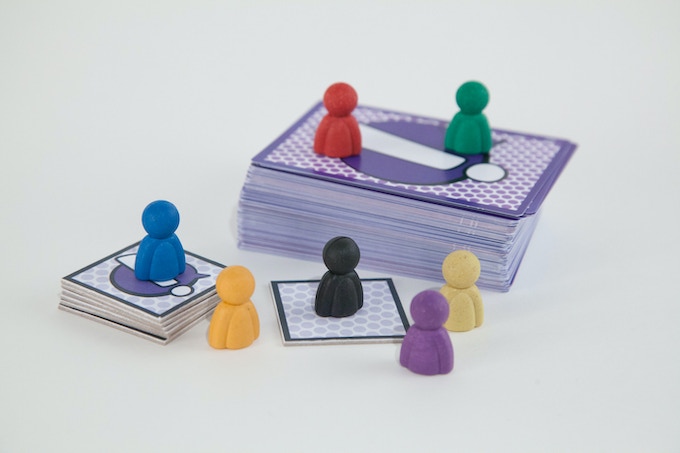 We encourage all players to explore and interpret the game in their own ways. Everyone has different play styles. You can cause chaos, collaborate, screw people over, or just come up with wacky ways to play the game. We want you to ask questions, not just make assumptions.

At the center of the chaos is Mr. Game: a leader, a judge, a tyrant or a scoundrel. In each game, one of the people playing actually acts as Mr. Game. This person serves as the enforcer of the rulebook and the final say on decisions in gameplay. The rules aren’t made to be broken, but Mr. Game can decide how the rules are interpreted. Everyone has their own interpretations and finds their own loopholes ensuring that no two games of Mr. Game! are alike! Is Mr. Game a hero of the people, or a self-serving tyrant? That’s for you to decide, because you’re Mr. Game and this is your game!

Because each Mr. Game will have his or her own unique personality, they will interpret the rules and handle discrepancies in different ways. This adds a sense of variability to the game, making each play-through unique.

We also heavily encourage house rules and game types. We will be supplying a booklet of over 10 alternate ways to play with the core game. Some of them tried and true like Teams or Last Man Standing. Some are a little more outlandish like Not Happening, which pits two factions against each other vying for ultimate completion - eliminate all players on the other team, or get each member on a different goal.

We think of Mr. Game! as a game system, rather than just a singular game with one fixed way to play. You can use what we have provided to play in uncountable ways. We want you to experiment in how you play, so we will be setting up an official place to submit house rules on our website. It will feature rules created by us and also interesting ones submitted by players like you!